Learn how to take a stand against hurtful words and statements on the internet. 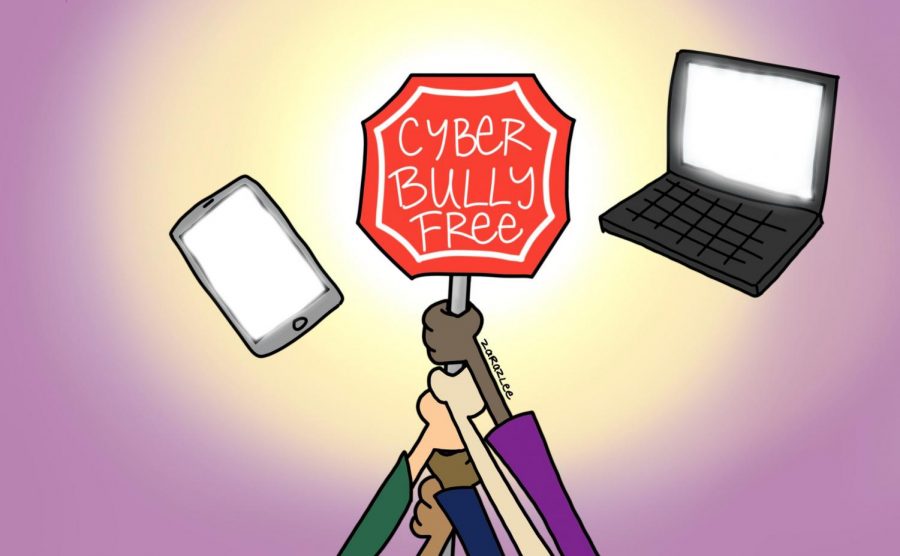 Cyberbullying is a problem that happens all over the world. It sounds like what it is: bullying on the internet that is intended to make someone feel unsafe or unhappy. Even though cyberbullying does not include physical contact or attacks, it can still damage internet users, such as lowering self-esteem. Especially during online school, this can frequently happen between peers. Fortunately, there are many methods of stopping this from happening!

There are a few bullies that do this to feel better about themselves. However, many cyberbullies do not realize that they are saying hurtful things. They might think they are playing a harmless joke, so the first approach to this is to talk to them. Many victims get tempted to fight back, but most cyberbullies want to get a reaction, so it is best not to give them what they want. One student had said she had talked to them about how they were hurting her feelings by saying such mean things, and the bullies had apologized immediately. If talking does not work, you should use any ignore or block functions provided for you. Deleting messages from bullies without reading them is another method that can work.

If the bullying does not stop or is beginning to threaten your safety, there are other methods to deal with it. You can save emails, messages, or screenshots that display what is happening. Cyberbullying can also happen during school. iUniversity Prep has regulations against these types of actions so that you can email your teachers about the problem. Seventh-grader Joseph, said he saved files and screenshots to use as evidence against his cyberbullies, and it worked in his favor very well. He even printed out hard copies, so he could tell his parents about what was going on as he showed them his evidence. Even if you think you can handle the situation yourself, it is a better idea to tell a teacher or parent to help you deal with it.

To protect yourself from becoming a victim of cyberbullying, be smart online. This includes not sharing your personal information with anyone you do not know since cyberbullies can impersonate people to embarrass them. The best way to act against cyberbullying is not to be a cyberbully yourself. Do not text or write anything you would not say face-to-face to a person. If you meant a message to be a harmless joke, it could be seen as an insult by someone else. Remember that whatever you say on the internet can stay there forever, and you cannot take it back! Even though messages might be anonymous, websites can usually figure out your identity.

Cyberbullying may be a problem worldwide on the internet, but everyone can do something to reduce the chances of this happening. If you see someone getting bullied online, do not be afraid to speak out against it!