An explanation of climate change and solutions to solve this drastic, widespread event 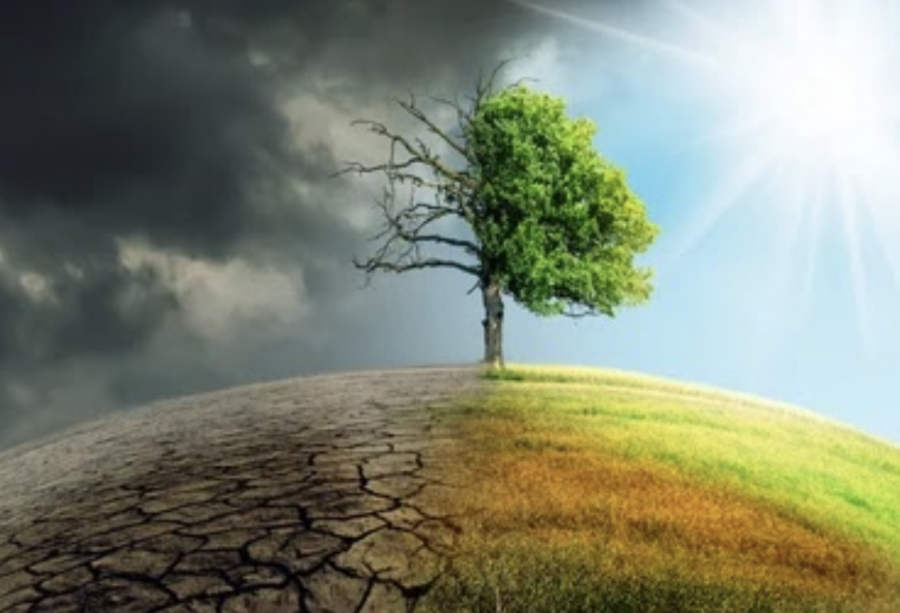 What is Climate Change?

Climate is the average weather conditions of a certain area or over a certain period of time. Climate change is the overall changes in the patterns of weather, either in a specific place or across the whole planet. Earth’s climate has been changing since its creation and continues to naturally change. But unnatural changes have increased dramatically as human impact and emissions have gone up, leading to an increase in greenhouse gases in the atmosphere, and many serious problems such as global warming along with a rapid decline of non-renewable resources around the world. Over the past centuries, we have seen immense rises in temperatures across the whole planet along with man-made destruction which has both created many issues around the world.

Climate change has caused ice caps to melt, making ocean levels rise abnormally, like in Italy during November 2020, when 80% of the city of Venice was completely submerged in water. It has also damaged and destroyed organisms and ecosystems that rely on the ice and ocean to survive. The Great Barrier Reef has lost half of its corals and habitats due to increasing temperatures in the surrounding ocean causing them to bleach (release algae in their tissues making them turn white) and therefore have a higher mortality rate. Animals like polar bears, seals, and penguins in the polar regions, such as Antarctica, are losing their homes from the melting and breaking off of glaciers. 1 million plants and animal species are at risk of extinction due to climate change as a report from the U.N. states, and we are one of the biggest reasons why this is happening. But that’s not all. Climate change has also affected natural disasters, causing them to become larger and more destructive, has hurt human and animal health from an increase of chemicals in the air such as smog, and has increased sea levels leading to many floods along coastlines. We can lessen all of these problems, one small step at a time.

Human emissions, fossil fuels, and pollutants are the biggest factors for the drastic changes we see in our world today. Fossil fuels are made from fossilized, buried plants and animals that built up over millions of years to become oil, coal, and natural gas. These fuels take very long to develop, so they are called nonrenewable resources. Gasoline-powered cars and other forms of transportation release exhaust fumes from oil and gasoline that stay in the atmosphere, building up over time. These fumes include the chemical carbon dioxide, which is also released from power plants and oil refineries for example. Carbon dioxide, along with methane, water vapor, nitrous oxide, and ozone, is a kind of greenhouse gas. Greenhouse gases are elements that absorb and trap heat in the atmosphere to keep the planet warm. When these gases increase in multitude and build up in the atmosphere from pollution and other kinds of emissions, this leads to global warming. This is very dangerous for the planet since the gases are trapping more heat than necessary, in turn melting ice caps, causing droughts, and heating ocean waters, which damages and disrupts marine ecosystems.

Pollution and other kinds of emissions have led to rising temperatures over the past centuries as proven by NASA along with the Climatic Research Unit in their data records. The most recent years have been some of the warmest years in history. This in turn has affected the world around us in many ways. The above-average heat has caused ice caps and glaciers to melt more than usual, in areas such as Greenland (which has lost 3.8 trillion tons of ice between 1992 and 2018) and Antarctica, leading native species to lose their only homes. These creatures depend on the ice to survive, and because of the excess heat being trapped on earth, they sadly cannot.

The melted ice also has caused ocean levels to rise (such as in Venice, Italy, mentioned previously), leading to floods and damages along coastlines and sometimes even further inland. Days with high-tide flooding are days where flooding has risen 20 inches above the average daily mark. Areas such as Corpus Christi, Texas, and Galveston, Texas, have both documented 18 days of record flooding in 2019. Eagle Pass, Texas documented 64 days of record flooding in the same year, which comes out to 1 of every 5 days of the year living with extremely flooded conditions!

The chemicals that makeup smog and pollution put humans and animals at risk of different kinds of dangerous diseases. From the CDC, climate change deteriorates human health by exacerbating asthma and cardiovascular disease, along with causing respiratory problems.

Extreme weather conditions such as stronger and more frequent hurricanes and other natural disasters than usual, above-average rainfall, wildfires (such as those in Australia of 2019 and California and Oregon 2020), and droughts have been affected by climate change as well. Natural disasters are causing more damage and loss of lives, flooding is a result of increased rainfall and rising sea levels, wildfires are destroying animals’ habitats and human homes, and the droughts are leading to a lack of food and water in some areas. All of these problems are a result of climate change and how we as humans are not taking care of the only home we have.

How can iUPrep Owls Help?
Alternate Resources~
There are many alternatives to using fossil fuels that can help keep our environment and earth a safer, cleaner place. Some examples include~

1) Wind Energy: Wind turns blades on a turbine to generate energy for power.

2) Solar Energy: Light from the sun powers solar panels or other solar technologies for electricity.

4) Geothermal Energy: Hot underground water is brought to the surface and used to pump turbines for power.

5) Biomass Energy: Organic material from plants and animals is used as fuel.

These renewable resources do not pollute the planet and will be around for a very long time. They can be used quickly and efficiently, and do not take much time to find or make in comparison to the nonrenewable resources we mostly use today. Using these resources will keep the earth safe for many years and slow global warming problems.
Other solutions~
1) Drive only when necessary. Do not leave the car running longer than needed, but instead decrease your amount of fuel emissions. Choose to walk to places if able.

2) Turn off electricity, air conditioners, and heaters when not in use. This uses a huge amount of energy which can hurt the earth.

3) Recycle paper, cardboard, glass, and plastic products. This reduces landfills and encourages reusing products in a safe way. Landfills are a big source of pollution, and recycling is a great way to reduce them.

4) Turn off the water when not in use. This also uses fossil fuels, so reduce pollution by using smaller amounts of water.

5) Tell others about the problem. Speak to everyone you know to spread the word about the dangerous issue involving the whole world. It is important that everyone is aware, and reduces their own carbon footprint to slow global warming.

How iUPrep Owls are already helping~

Sofia Lopez, a 6th grader at iUP, says she buys trees to plant because “Trees have such a positive effect on you, and our world is running out of trees, so we need to do this together!” She goes on to say that doing this impacts her greatly since “When I moved to Texas, right by my house lived many acres of trees, and a few weeks ago people cut them ALL down. This has impacted me to want to do more to help the environment!”

Another 6th grader, McKinnley Rupp, says she uses reusable water bottles and straws to help the environment and also chooses to recycle. This she does “To help with pollution and to save the ocean.” It makes her happy to reuse and recycle because it results in less plastic waste and pollution.

9th grader Eve Bamber comments, “I’ve been vegan for a year now and made the change because I learned that the meat and dairy industry contributes enormous amounts to climate change and destroying the environment.  I try to only shop from sustainable brands and to avoid fast fashion, as the fast fashion industry is increasingly degrading the environment.” She does this because “I’m extremely passionate about the environment, and was raised to have a great deal of respect for the Earth around me.” She feels proud of her efforts that she is making toward the environment, and loves knowing that she is making a difference by not contributing to the illness of climate change that is poisoning the Earth.

Mrs. Dehnel, an algebra teacher at iU Prep, states that she recycles, uses bamboo paper products, reusable water bottles, and gives away old things instead of trashing them. She goes on to say that this impacts the world by having slightly less trash in a landfill.

One student, 9th grader Kat Russel says she and her family recycle to limit the amount of trash they put in their trash can. This helps the environment because the items they recycle will be taken to a recycling center instead of a trash dump.

Mrs. Jones, an English teacher at iUPrep says “I drive less, recycle, try to eat local foods, and try to do carbon neutral shipping if possible.” This she comments, makes her feel better to do small things that protect the environment. She goes on to say “Even if my carbon footprint does not impact the world as significantly as I’d like, I feel better doing as much as I can.”

Ezra Rajagopal, a 6th grader, says he wants to “Start not promoting coal and other resources from being dug up and releasing methane and CO2 into the air.” He wants to do this to help out animals who are affected, and because it is what is causing global warming. He jokes that if this keeps going on, “I won’t be able to see the tundras in my 70s!”

A junior at iUPrep, Lauren Burgess, states that “I go on a lot of walks, so if I see any trash littered in an area like a park or where it’s not supposed to be, I’ll pick it up and try to find the nearest trash or recycling bin.” She does this because “The environment and its health are extremely important. There are so many animals living in those parks and forests. Trash on the ground instead of in trash cans where they belong not only pollutes the environment but puts those animals in danger as well.” She also says “By knowing that I’m helping the environment stay clean, even in a small way like picking up trash, is a great feeling! The earth is our home and it’s up to us to make sure that it stays clean and well taken care of. There is so much beauty in nature and helping to preserve that is very rewarding.”

These students and staff understand the conditions of the immense problem our world is facing and have chosen to act upon it. You can choose to do this too, from using renewable resources, to saving and using less power and electricity. It may be very difficult, but together we can slow the effects of climate change around the planet. Start spreading the word today!